Length : 27.5 Miles - 44.3 Kilometers
Fees : None
Time to Allow: It takes only about one hour to drive the byway itself.
However, it takes time to explore the historic villages of Griggstown, East Millstone, Millstone Borough , the Borough of Rocky Hill, and Kingston, and the historic districts and nature preserves, the Delaware Raritan Canal, Six Mile Run, Blackwell Mills, Colonial Park, River Road Agricultural District, Griggstown Grasslands, the village of Harlingen, and to hike the various trails.

Located in the narrow Millstone River Valley in north central New Jersey, the Millstone Valley Scenic Byway offers you a glimpse into the past where well-preserved pieces of the canal era, the revolutionary war era, and early Dutch and American heritage live on. In addition to the major Revolutionary War troop movements and military campaigns that took place along the byway corridor, there are a remarkable number of intact historic districts, historic sites, and villages associated with each of these eras. The nearby Delaware and Raritan Canal and towpath are popular for canoeing, jogging, hiking, bicycling, fishing, birding, and horseback riding. The Millstone Valley is a haven of historical sites, recreational sites, and natural beauty.

The Bridgetender's House, wooden bridge and mill site are reminders of the area's active past. Several annual events are held at the canal house (contact the Blackwell's Mills Canal House Association for the current schedule of events).
This historic site provides access to the canal, towpath and river, and it is only a couple of hundred yards away from the Six Mile Run Trailheads.

Nestled in central New Jersey, the Six Mile Run Reservoir Site provides an essential area for the public to enjoy the splendor of nature. The 3,037 acres offers areas of land to hike, bike, horseback ride, bird watch and hunt.

The Six Mile Run Reservoir Site, located in Franklin Township, Somerset County, has a rich cultural history. Today, you can still find 18th century farmhouses, Dutch-framed granaries and barns that tell the story of the first Dutch settlers who inhabited the area in the 1700s. Farming has always played a significant part here, providing agricultural goods as well as a sense of rural charm. Currently, much of the land is leased to the public for agricultural purposes. The remaining acreage consists of forested lands and open fields creating a habitat for a variety of plants and wildlife.

The land was first acquired by the State of New Jersey in 1970 by the NJ Department of Environmental Protection, Division of Water Resources as a future reservoir site to serve as both a water supply and a recreational area for the public. In 1993 alternative water supply sources were discovered and the administration of the property was transferred to the New Jersey Division of Parks and Forestry.
Six Mile Run Reservoir Site has remained an oasis of farm fields and forests in an ever expanding community. We encourage you to take the opportunity to experience the beauty of this unique area.

The Meadows Foundation is in charge of the maintenance and use of
three historic farmhouses and some other  farm buildings in the Six-Mile-Run reservoir area . These buildings are open to the public during organized events such as lectures, tours, demonstrations, reenactments etc.
The Meadows Foundation web site :
http://themeadowsfoundation.org/‎

For more info and trail map click on
http://www.franklintwpnj.org/home/showdocument?id=1330

The Griggstown Native Grassland Preserve is in the Stonybrook-Millstone watershed.  The trail system in the Griggstown area covers 376 acres, but these trails connect to other trails that transverse the entire length of the  685 acre Ten Mile Run Greenway.  The northern border of much of the property is bounded by Simonson Brook, with Coppermine Road as the southern boundary.  The site contains both 102 acres of open fields and 583 acres of woodland.  Historically the fields were row crops but more recently the property was used as a horse farm.
Unique Wildlife and Landscape Features
Sensitive species found on this site include the Grasshopper Sparrow and Bobolink (both New Jersey state threatened species), the American Kestrel and eastern box turtle (both New Jersey special concern species), and the Short-eared Owl (New Jersey special concern species - non-breeding).  The uncommon Northern Bobwhite may also be found at this location.  Bluebird nest boxes and the Barn Swallow structure offer an opportunity to view these bird species.  A checklist of birds and butterflies of Ten Mile Run may be downloaded as PDF files by clicking here:  Birds  Butterflies  For a brochure about the life history and nestbox use of Bluebirds,click here.
Standing at the southeastern most corner of the Sourland View Trail offers an exceptional view of the Sourland Mountain Ridge.  Although 7.2 miles from the park, visitors can easily view the Sourland Mountain Ridge which is 568 feet at its highest point.  The ridge spans roughly 20 miles across corners of Hunterdon, Mercer, and Somerset Counties.  Although the underlying geology of this region makes it undesirable for farming, this same geology makes the Sourland Ridge an important source of freshwater in the region.  The traprock deposits of New Jersey are of late Triassic, early Jurassic age.
Habitat Restoration at Griggstown Native Grassland Preserve
Habitat restoration activities included the removal of 5,800 feet of fence and hedgerow.  Removal of this barrier was an important step in creating 102 acres of open fields.  In 2005, roughly ? of the 102 acres (viewed via the Bluebird Loop) was restored with a mixed planting of native grasses such as big bluestem, Indiangrass, sideoats grama, Virginia wild rye, and eastern gama grass, and wildflowers such as purple cornflower, common sneezeweed, blue vervain, and black-eyed Susan.
Passive Recreation Activities
Franklin Township has six trails at Ten Mile Run.  These trails take visitors through pasture, restored grasslands, and mature forests.  Interpretive signs at select locations provide a brief background of the surrounding area.  NJAS has also helped develop, organize and coordinate Eagle Scout projects.  Completed projects at this site include a kiosk, trail construction and marking, the Barn Swallow structure and the placement of Bluebird nest boxes.  A map and rules and regulations of the 5.4 mile trail system may be downloaded as a PDF file by clicking here.
See also:
http://en.wikipedia.org/wiki/Ten_Mile_Run_(New_Jersey)
http://en.wikipedia.org/wiki/Simonson_Brook_(New_Jersey)
The Ten-Mile-Run and Simonson Brook flow through the preserve and into the Millstone River:  Ten -Mile-Run north of Buttler Road and Simonson Brook just behind the Scenic Byway Visitor Center

This is a carry-in/carry-out facility.  There are no restrooms on site

One of the more heavily visited spots along the canal. Here the visitor can see lock #8, the locktender's house and station, and a mill site that are all located along Route 27. This site also provides access to two miles of towpath along Carnegie Lake. 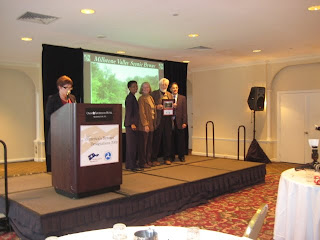 So get out there and enjoy our local--and National!--treasures, and just imagine that one day, families in flying cars will be doing the same!

Below are pictures of the designation event in DC! 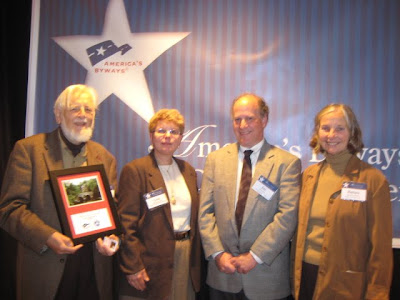 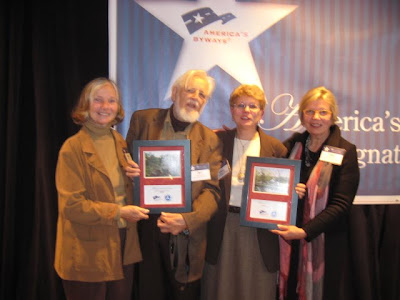 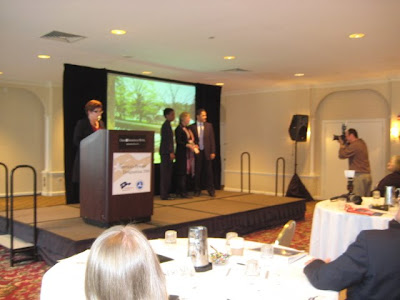 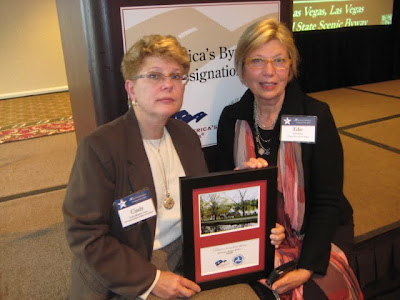